The Stars Of “Naagin,” Arjun Bijlani & Mouni Roy Reunited Once Again; Enjoyed The Dinner Together

Mouni Roy and Arjun Bijlani are prominent personalities of the entertainment industry. They have a huge fan following, and their fans always wait for their pictures to appear in the public corridors. For the inattentive, Mouni and Arjun shared screen-space in the first season of Ekta Kapoor’s TV show “Naagin,” and their characters of Hrithik and Shivanya in the show had been highly appreciated and loved by the audience. And, once again, the two reunited last night.

This time, Mouni and Arjun met over dinner, and Arjun’s wife Neha was also accompanying them on this meeting. They all smile for the camera as they have spent time together. It is worth noting that Arjun is married to Neha Swami, and the couple also has a child named Ayaan. On the other hand, Mouni married businessman Suraj Nambiar this year.

On the professional front, Mouni Roy will soon be seen in the film “Brahmastra,” directed by Ayan Mukerji. The film stars Alia Bhatt, Ranbir Kapoor, and Amitabh Bachchan, among many others, in pivotal roles. The filmmaker intended to present it as the first film in a planned trilogy. It will hit the theatres on September 9th in five Indian languages: Hindi, Tamil, Telugu, Malayalam, and Kannada.

Meanwhile,speaking of Arjun Bijlani’s work-line, he has been a part of successful shows including: Left Right Left, Miley Jab Hum Tum, Meri Aashiqui Tum Se Hi, Naagin, Kavach, Pardes Mein Hai Mera Dil, Ishq Mein Marjawan, and many others. Arjun was last seen on the entertainment-based TV reality show “Smart Jodi,” where he participated with his wife Neha Swami. Moreover, he has also been a part of many reality shows and music videos. 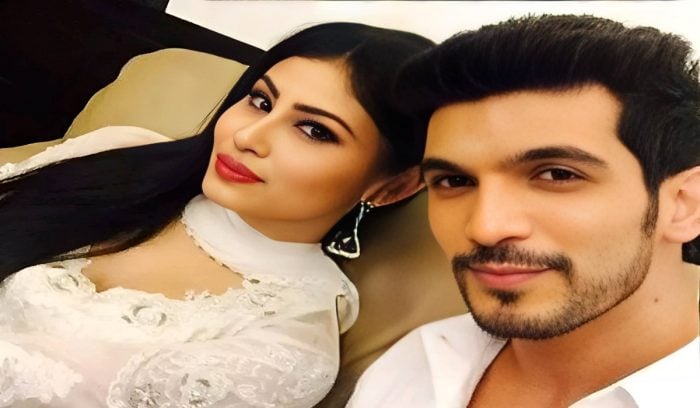 Arjun’s last music video was “Ho Gaya Hai Pyaar” with Surbhi Chandna, and the song was a hit among his fans. Currently, the actor is hosting the reality show “Ravivaar with Star Parivaar,” which is airing on Star Plus on the weekend.