Karisma Kapoor And Neetu Kapoor Wishes ‘Soon To Be Dad’ Ranbir Kapoor On His Birthday, Check Pictures Inside!! 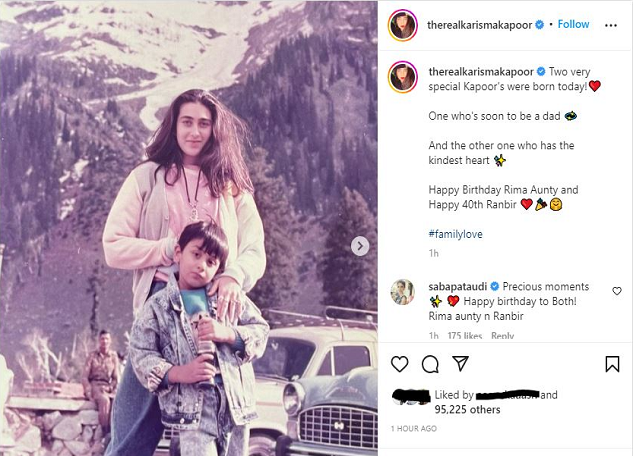 Karisma Kapoor shared a throwback picture featuring herself and Ranbir while wishing him on his birthday. In the picture shared by Karisma, she is seen standing with Ranbir Kapoor in front of her with mountains at their back. Karisma was seen wearing a pink top under a sweater and loose denims. While, Ranbir was seen in a blue T-shirt, under a denim jacket and pants. 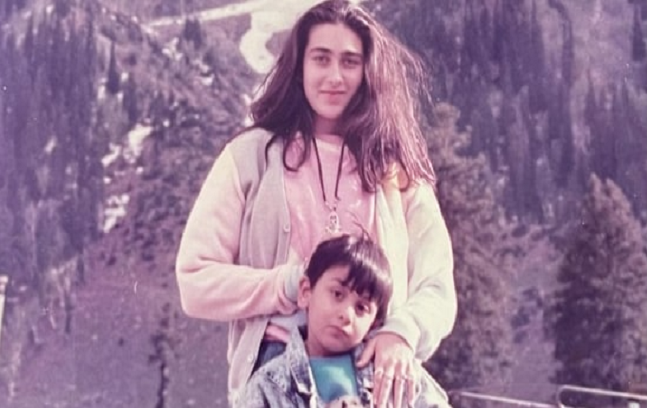 And in another picture, Karisma sat behind Rima as they both looked away from the camera. This photo from Rima’s wedding. Karisma was seen wearing a red and orange outfit while Rima wore a white dress. Karisma Kapoor wrote, “Two very special Kapoors were born today! One who is soon to be a dad. And another one with kindest heart. Happy Birthday Rima Aunty and Happy 40th Birthday Ranbir”, along with the hashtag family love. Saba Ali Khan commented on the photo, “Precious moments. Happy birthday to Both! Rima aunty and Ranbir.”

Kareena Kapoor also shared a picture of Rima with her son Taimur Ali Khan on her Instagram Stories. They are seen looking at each other as they made faces. She wrote in the caption, “Happy birthday to one of my most favourite people. My Rima aunty @rimosky.” 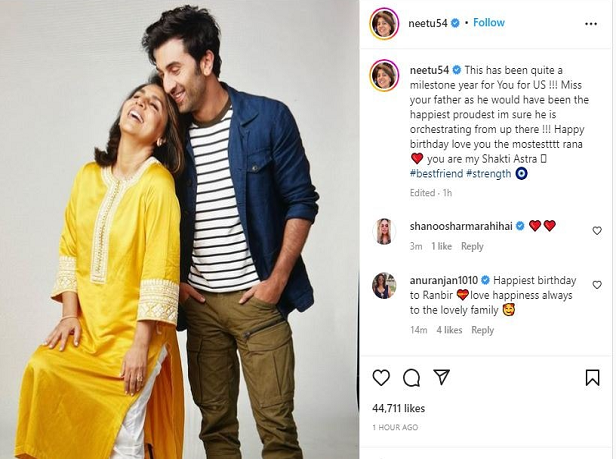 Neetu Kapoor also wished Ranbir with a post by sharing a picture featuring the duo and she wrote in the caption, “This has been quite a milestone year for You for US !!! Miss your father as he would have been the happiest, I’m sure he is orchestrating from up there !!! Happy birthday and love you the mostesttt. You are my Shaktiastra #bestfriend #strength.” She also wished Rima by posting a selfie as the duo posed for the camera, Neetu wrote in the caption, “Happy Birthday Bhoks @rimosky more friend than family have an amazing year love you loads.”