Mouni Roy and Sooraj Nambiar have started their new journey by tying the knot on January 27. The love birds first married according to South Indian customs in the morning, then the two became one after marrying in Bengali tradition. Keeping the respect of each other’s feelings, the couple got married with pomp in both the traditions.

The couple is making headlines since their marriage. Many pictures of both are becoming viral on social media. At the same time, Mouni Roy has also shared pictures of her wedding with her fans from time to time. Which fans have also liked very much. Especially after seeing both the wedding looks of Mouni, you too will become crazy about her. 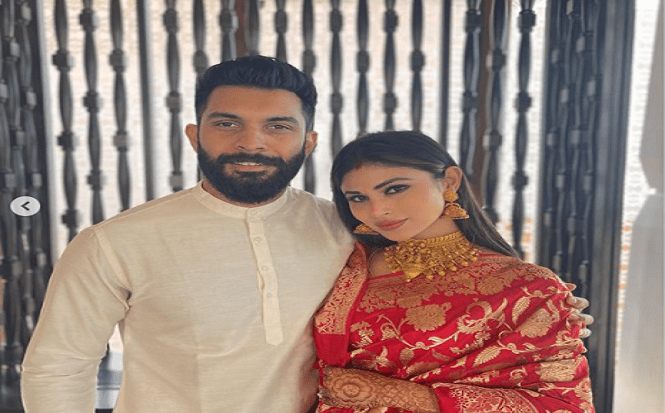 Mouni has always been active on her social media. Recently, Mouni has shared some pictures with herself and Sooraj Nambiar. In which Mouni is seen flaunting her sindoor wearing a red sari. Mouni’s gold heavy jewellery is complementing her look with a sari.

In the shared picture, husband Sooraj Nambiar is also seen posing with Mouni. Wearing a white kurta, Sooraj is posing with his hand on Lady Love’s shoulder. Mouni’s heavy gold jewellery seen in the picture has been designed by CKC Jewellers. However, all the dresses that Mouni has worn in her entire marriage are amazing. Be it her wedding lehenga or sangeet floral lehenga. Mouni also looked very beautiful in a white sari while being a Bengali bride. 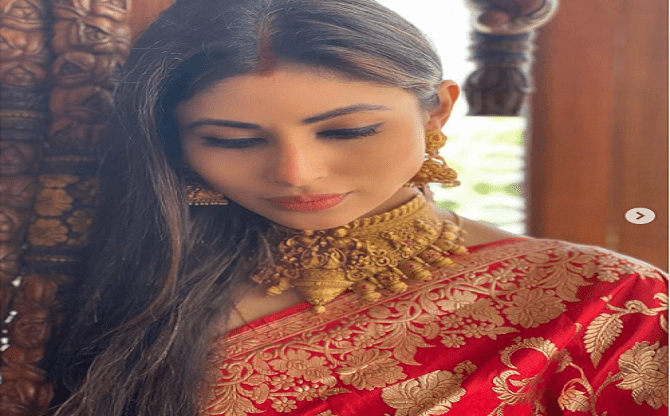 Mouni has done love marriage with Sooraj. Although both of them kept their relationship hidden from everyone. But, when some such videos went viral on social media in which Mouni was calling Sooraj’s parents as mom dad since then the fans started feeling that both are dating each other.

Everyone was shocked to hear the news of their marriage. No one had any idea that Mouni was going to marry Sooraj. Although the rumours had flown earlier. But, people considered it to be a rumour. Mouni has surprised everyone by getting married suddenly. But, the fans have liked the pairing of both. Even after marriage, both have been spotted many times.