Mohan Juneja, a Kannada actor, and comedian who was last in KGF Chapter 2 passed away at the age of 54. The actor had been battling a long illness and passed away on Saturday, May 7. The cast and crew of Yash’s most recent blockbuster have expressed their condolences to the renowned actor. He’d been unwell for quite some time. After failing to respond to treatment, he died at a Bengaluru hospital. He was most recently seen in the popular KGF Chapter 2 and KGF Part 1 films. 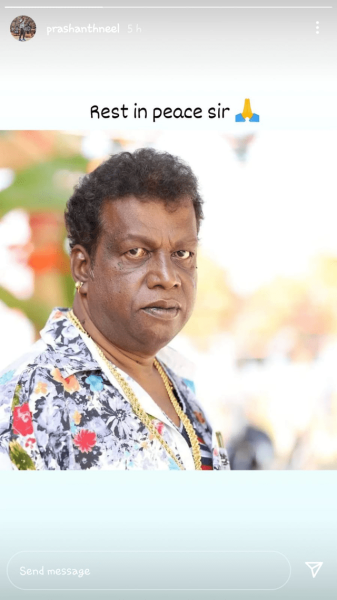 Juneja’s death was grieved by the production house, which tweeted about it. He was one of the successful actors from Sandalwood, according to Hombale Films. “We extend our heartfelt sympathies to artist Mohan Juneja’s family, friends, and well-wishers. He was a well-known figure in Kannada cinema and our KGF family.” The comedian started his career in Shankar Nag’s Wall Poster and played the lead in over 100 films, including Tamil, Telugu, and Malayalam films, over his career. Chellata is among his most well-known films, and he was known for playing both villainous and comic roles. Among the celebrities with whom he worked were Darshan, Upendra, Puneeth Rajkumar, Ambareesh, and Shivarajkumar.

Mohan played Nagaraju, the informer, for the uninitiated. The person who tells writer Anand Ingalagi about Rocky’s hidden side (Yash) (Anant Nag). When it comes to KGF Chapter 2, the film has now become a historic hit, grossing more than Rs 1000 crore so far. The Hindi version of the film grossed over Rs 400 crores, making it the second-highest-grossing Hindi cinema after Bahubali 2: The Conclusion.