The Pataudi family carries a certain class in them. Every time they step out of their houses, they tend to grab eyeballs. This afternoon was no different. The elder heir of the family, Saif Ali Khan headed out to meet his children- Sara Ali Khan and Ibrahim Ali Khan. The trio was captured by the paparazzi outside a Mumbai restaurant. Seems like the ‘Father’s Day’ celebrations have already begun.

While Saif kept it casual with a grey tee and denim, Ibrahim wore a blue shirt with denim for the get-together. Sara, who joined her brother and father post a gym session was seen in a white vest and shorts.

As soon as their pictures got circulated online, the netizens started commenting on the same.“Sooo cute dad and daughter duo,” a fan commented. Another simply appreciated the three and wrote, “Pataudi’s,’ followed by heart emojis. Many gushed over Sara’s “stunning looks.”

On the professional front, Saif has recently wrapped up shooting for Vikram Vedha. In the film, he plays the role of a police officer while Hrithik is portraying a gangster. Saif will also be appearing as Lankesh in Om Raut’s Adipurush. Besides him, the film stars megastar Prabhas as Raghava and Kriti Sanon as Janaki. 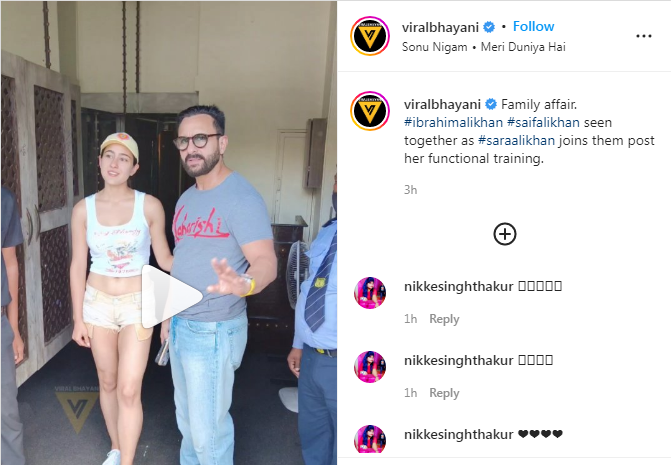 As for Sara, the young actress was last seen alongside Akshay Kumar and Dhanush in Atrangi Re. She will next be seen opposite Vicky Kaushal in Laxman Utekar’s directorial. The actress is presently working on a film called Gaslight. Recently, Sara drew flak from netizens after donning a black gown with a thigh-high slit for an awards show.

Ibrahim too is looking forward to making a career in Bollywood. He is working as an assistant director on Karan Johar’s directorial, Rocky Aur Rani Ki Prem Kahani. Talking about the same, Saif told a leading daily, “I am concerned for his future and I am happy he is working hard. I think he has done well in school and like any parent, I’m full of nervous prayer that his future goes well.”