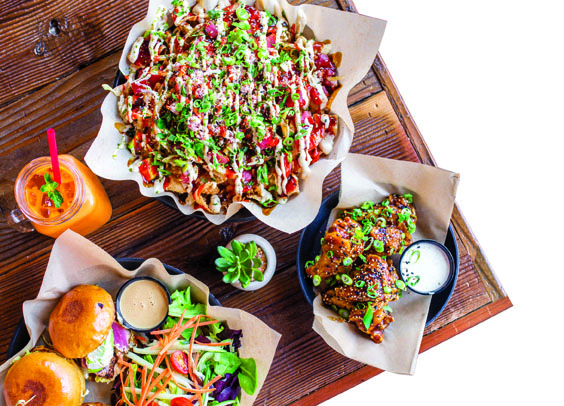 Wars happen. The world changes. Not just the borders but the cuisines change as well. The Brits came to India and we learned to make cakes and custards and when they left they went armed with recipes for curries and pulavs. Since they had opened up a passage to Britain, Indians went in droves to England carrying their masalas, with them. 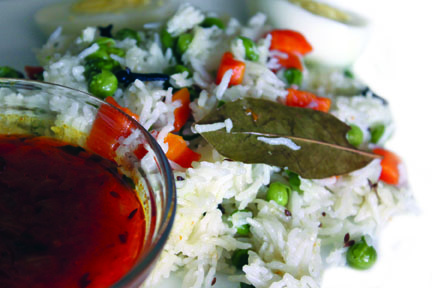 And to Canada, with Dalda tins – to any place where English was spoken.

More wars happened. The Korean War, the Vietnam War, trouble in Laos, etc made the West question the ‘American Way of Life’ (two cars, two kids and a trophy wife). The Beatles discovered Ravi Shankar and Maharishi Mahesh Yogi and beat a path to India. Some chose Zen and went to Japan.

The Chinese, like us, never lacked for trouble. They too spread across the globe carrying their chopsticks with them.

In no time, the Brits found chicken tikka masala more palatable than a pot roast and we had ‘discovered’ soups and salads.

In the meantime, the mad rush to become computer engineers brought the North Indians and others to South India to join engineering colleges. They brought their longing for chats and chapatis with them and the Southie boys and girls who went North took their longing for idli, dosa, sambar with them. The more enterprising ones opened dhabas in the South and Madras Cafes in the North.

The IT guys and gals now had money to travel for pleasure as well, not just on work. So, exotic holidays were the order of the day. Greek dolmas, spicy (even by our standards) masaman curries, Thai red, yellow and green curries, falafel, shwarma, etc became common in our Metros. American food giants, Kentucky Chicken, Macs, Pizza guys saw a chance to open shop in pristine new markets. They set up establishments in China, India and soon, all over the globe. But they had to tweak the original recipes to stay on, once the novelty wore off. No beef in India. No pork in Islamic countries. China only stopped short of cannibalism. And so, fusion was born.

Everybody has been there and done that…now what? Now, fusion. A burger is a bore. So, now a burger tikka is on offer. A paneer option had to follow in widely vegetarian India. Some spice had to be added.

Chinese food is as Indian as they come. Every mid-level hotel has to have these three options to survive. They are North Indian, South Indian, and Chinese. But what is served as Chinese is what we think it ought to be. Not what the Chinese cook.

The fact is, new, ‘untasted’ food is always approached with trepidation. To get newbies to accept it, you have to tweak it to look and taste a bit more familiar. Yet, you have to please the thrill-seekers who crave something daring, something new. So, they try fusion and please both palettes.

Gobi Manchurian is truly a brilliant bit of fusion. It is vegetarian, which satisfies a lot of people. It sounds exotic…Manchuria, Mongolia? Where is it from? It has all the spices possible, both Indian and Chinese and is fried to boot. What’s not to like? 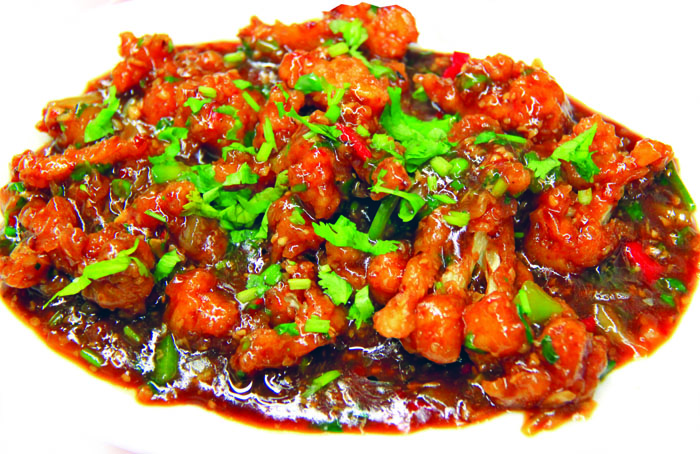 England was once home to Madras Curry Powder which they used, indiscriminately, in any gravy. And to tame the chillies, they added grated apple to it. Is that Indian food? No, but to make it exciting they called it fusion.

In the fancy and five-star restaurants, fusion is passé. They go in for molecular gastronomy with liquid nitrogen or deconstructed dishes. But fusion rages on in our street food.

Ferran Adria developed molecular gastronomy where chemistry meets chef and edibles. Heston Blumenthal with his nitrogen frozen ice-cream, meats that look like fruit and other such exotica, caught the fancy of the gourmet and if I may coin a phrase, the dare me (one who dares to eat what seems weird). Abhijit Saha, chef extraordinaire, is India’s ‘gastronomist’, liquid nitrogen and all.

Jacques Derrida started what is now seen as deconstructed food. An apple pie is likely to come on a plate as stewed apples, a blob of cream, a freshly baked biscuit and a gob of cheese.

But it is SanjeevKapoor and VikasKhanna who brought fusion back again to the fore in India. Their TV shows are phenomenally popular. We have seen them serve Gulab Jamun in rich chocolate sauce, appams and chicken jalfrezi, etc with awe and sometimes, a queasy stomach. Much like the Mexicans who serve meat floating in a spicy chocolate sauce. Really? Who eats that? Apparently, many.

In Lajpat Nagar Market in New Delhi, a vendor had mounds of strange-looking grub. What was it? He called it Chinese chat! In a very small town in Karnataka called Bangarpet, they make what they claim is world-famous(!) chat. No Bengali Market vendor will recognise it as such. It has puffed rice, grated carrot, crushed peanuts and no one know what else – but they claim it’s chat.

In Jalpaiguri, West Bengal, a young man made a quaint dish for us. He boiled macaroni and added a nice South Indian thadka of rye, chillies and jeera. He said they love it that way in his village. We ate it with Channa made Punjabi style.

A friend of mine combined two favourites to regale her guests. She made large idli and spread cheese and chutney on it and called it pizzli…pizza and idli.

A food cart vendor in the lanes of Bengaluru boasts that he can make 99 varieties of dosa. He stuffs one dosa with noodles and calls it Chinese dosa. Another has cheese grated over the potato mix in the folds of it.

For fusion to work it cannot just be a novelty. It must taste good. Like the South African Bunny Chow where a loaf or a half loaf of bread is hollowed out and a hot, spicy curry is poured into it. It works because it tastes good. It’s a marriage made in heaven unlike the momos drowned in cheese sauce.

Most of the food truckers in New York make their own country’s food but lavish gobs of cheese on it to dumb it down for their customers.

Korean food is a delightful combination of a soupy something eaten with noodles or rice. All the flavour makers are added to it by the customer. A sort of DIY (do it yourself) meal. You add the sauces you like, the meats you want, the veggies you wish for and down the lot. Quite like Thai, Vietnamese or Malaysian food. It’s very hard to do any fusion with these. Add anything except the indefensible, and it goes. 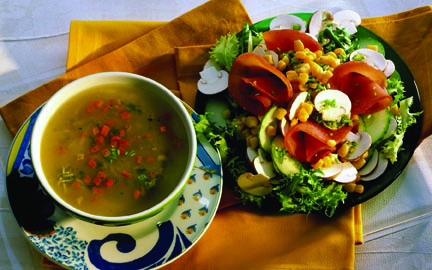 Sushi, sashimi, they cannot tamper with either. The Japanese have worked patiently to make it as close to perfection as possible and you can’t mess with that without the chef committing harakiri!

Giving it a twist

I was offered a spoonful of ice- cream to taste, once in downtown Manhattan, NY. I nearly jumped out of my skin. It was chockfull of chillies. The girl who gave it to me smirked and said, “I thought you people love hot food.” “Hot food, yes. Chilliice-cream, NO! It is a shock to the tongue.”

What about rolls? Kolkata’s rolls are nothing but a desi take on sandwiches. The Earl of Sandwich wasn’t the only one who wanted one hand free to play cards! We replaced bread with a paratha, cold cuts with a dry curry, added bits of onions and tangy chutney and voile– the Indian sandwich is born.

What is vada-pav but a desi burger? What is kulfi but an Indian ice-cream? We have taken the basic idea and given our own twist to it. Now, that is fusion. Now that is why you cannot take India out of the Indian.

In a pub in Indiranagar, Bengaluru, papdi is filled with a vodka spiced sauce. The customers love it. Talk about getting high on food! Quite a few people serve ice-cream with rum spiked sauce or, even glitzier, champagne.

There is no escaping fusion. Especially in our weddings where every extravagance is tried. That is why Mamis from Mylapore, Chennai and Sharmas and Mishras from Varanasi will also try to serve the ‘safe’ in a strange avatar. Let me elucidate. In South India and in Bengal too, as far as I know, they serve festival food on leaves. Usually banana leaves. And it is traditional delicacies that are prepared. Now, in Chennai, the same sambar gets a makeover with baby corn in it. The rasam’s souring agent is not tamarind but pineapple or pomegranate juice. Cauliflower, Savoy cabbage or Broccoli is served made the South Indian way. The Mishra wedding may daringly serve luchikachori with corn or beetroot stuffing. You may laugh but for traditionalists this is a BIG change. These are ‘alien’ veggies. Not our local ones.

Ah, well. There you have it. Fusion is still big and it’s unstoppable. My worry is that we will completely forget the original dish where this fusion sprang from. And that, my friends, is a tragedy. We will then be losing a big chunk of our culinary treasure.

Banning Junk Foods Near Schools- Boosting tomorrow’s health.
Mindless Munching Mania! Something to chew on.
Simple And Important Self-Care Practise You Need To Know
Give Your Classic Gujiya A Makeover This Holi; A Colorful Twist For Your Taste Buds