Here’s a list of six places that can be explored by a solo traveller throughout our country.

Amidst the pulsating beauties of the Himalayas… 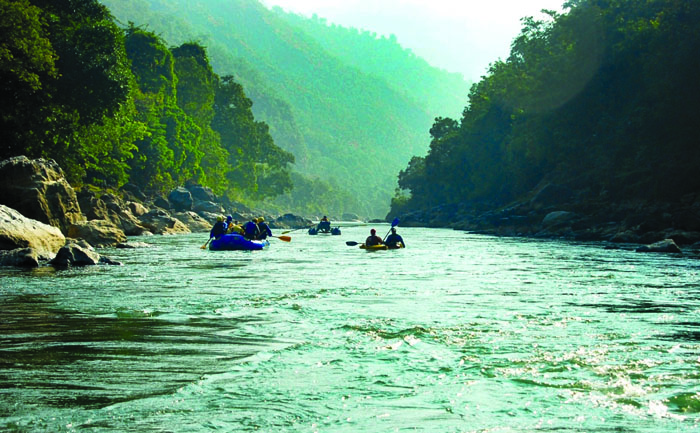 The tranquillity prevailing in Lohaghat has a special charm. Situated on the banks of river Lohawati, Lohaghat promises a beautiful holiday with its crisp, cool and invigorating mountain breeze.

The easily accessible exquisiteness of Lohaghat has undoubtedly made it a popular weekend destination. With its deep ravines, rolling meadows and dense forests, this locale are even apt for those who want to remain pleasantly idle.

It is located 63 kilometres from Pithoragarh at an altitude of 1750 metres. Unlike other hill resorts in the northern Himalayan belt, it is neither snow-bound in winter nor over-crowded during the summer.

Lohaghat is especially popular for an enchanting excursion to Pancheswar, at a distance of 47 kilometres. At this locale, one can witness the beautiful confluence of rivers Kali and Saryu. Throughout the region, this spot is famous for the Chaumu temple and it’s annual fair. Besides traditions, Pancheswar’s surroundings are ideal to capture the beauty of the spectacular Himalayas. 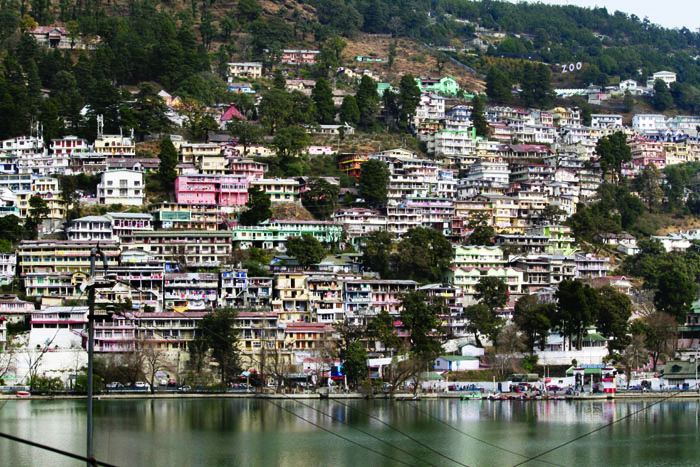 Lohaghat is truly amazing for its scenic locals. The Banasur Fort also known as Kotalgarh is constructed on a ridge, in a charming ravine, at an altitude of 1920 metres. According to a legend, Kotalgarh is fabled to have been the stronghold of the demon Banasura, the son of Mahabali, who fought with Lord Vishnu.

Abbott Mount is another spectacular place. It is a captivating resort amidst dense forests of oak and deodar. This spot is noted for its a scenic charm and breathtaking views of the Himalayan peaks. One can indulge in nature walks on forest trails here.

Excursions from Lohaghat lead to Champawat, the capital of this beautiful region. Situated at a distance of 13 kilometres from Lohaghat, Champawat is famous for its historical, sculptural and archaeological remains. Champawat from where the Chand dynasty ruled, hold ruins of the past glory.

Here Manch and Guru Goraknath’sdhuni is a sacred locale. The Manch is situated amidst thick forests near Champawat and is manifestations of the deep-rooted local tradition of forest preservation. The dhuni, dedicated to Guru Gorakhnath, is a sacred fire that burns continuously.

Undoubtedly, Lohaghat is an unsung hillside which has managed to retain its natural charm and splendour for over a century. To get the best of the trip, it is advisable to explore Lohaghat between November and June. The weather is especially pleasant during November and December, and there is a healthy nip in the air.

Towards the northern end of the bewitching Silver Valley in Manali around 40 kilometres from Kullu.

Manali is one amongst the favourite destinations for a solo traveller due to the opportunities of a number of mountain sports available here.

Solang has good skiing slopes and commands a majestic view due to the winter sports festival organised by the Mountaineering Institute. The Department of Mountaineering and Allied Sports has sufficient lodging and boarding facilities and trekking equipment can be hired from here. This institute also organises short-term and advanced training courses in hiking, paragliding, trekking and mountaineering. One should especially not miss the opportunity of river rafting here as it calls for a swift swirling river as it gushes past spectacular mountains.

Manali is also known for its spectacular snow-clad peaks, the Beas river with its crystal-clear water meandering through the town, deodar and pine trees, tiny levelled terraced fields and fruit orchards of apple and apricot.

Manali has many attractions. One among these is undoubtedly the Hidimba temple that is renowned both historically and archaeologically. It is dedicated to goddess Hidimba of Mahabharata fame, the wife of Bhima. A colourful festival is held here in the month of May every year.

Just near the Hidimba temple flows the manual river that culminates in the original Beas river. One can see the original village of Manali here that houses the ancient temple of sage Manu who is said to have dwelt here.

The Rohtang Pass is truly breathtaking in Manali on the highway of Keylong. It is the gateway for the spellbinding Lahaul and Spiti valleys. Also a few kilometres away from the pass is the famous Sonapani glacier.

The Rohtang Pass just opens for four months during the months of June to October when the snow melts. From the Rohtang pass, one can further explore the beauty of Lahaul and Spiti valleys too. Lahaul is situated around 115 kilometres from Manali at an altitude of 3, 980 metres. It is marked by a central mass of almost uniformly high mountains and massive glaciers. The two rivers Chandra and Bhaga flow through these narrow valleys. These places provide excellent opportunities for mountain biking too.

There is no monsoon in Lahaul valley and this enables mountaineers and trekkers to enjoy a long season in perpetual sunshine and dry crisp weather and explore the wilderness of the inner Himalayas.

There are many hot water springs in and around Manali. Some prominent ones are Vashisthkund and Nehru Kund.

Near Manali, Kullu is also famous for breathtaking scenery, apple orchards, wooded hills, manicured gardens and the gushing Beas river. Kullu is known as the land of cultural fairs, festivals and temples. One of the most colourfulDusarafestival is celebrated in this captivating town.

Dalhousie and Khajjiyar in Himachal Pradesh 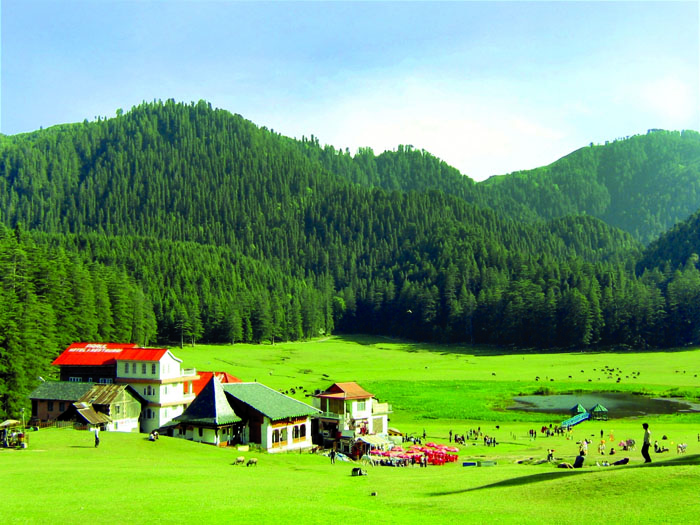 The Khajjiyar grasslands also known as Switzerland of India.

Surrounded amidst the gentle Dhauladhar range, Dalhousie promises a solo Traveller a short and pleasant holiday at an altitude of 2,036 metres.

The most fascinating part of visiting Dalhousie is its engrossing picnic spots. Panjapula is spellbinding. Panjapula denotes five bridges. At this location, there are many sparkling waterfalls. Above these waterfalls, there are five bridges sprawling across or two kilometres. The samadhi of Ajit Singh, the uncle of revolutionary Bhagat Singh is located here.

Located at an altitude of 2,745 metres, Dank und is known for its incredible mountain views. Walking around one is greeted by rosy cheekedpaharis, men and women clad in their traditional attire and trying to preserve their distinctive culture. A splendid view of the Beas, Ravi and Chenab rivers from here is truly breathtaking!

On the other side of Dalhousie is Kalatope around nine kilometres from the town. Kalliope is a beautiful location with green meadows, fields and dense forest trails. Here nearby locals wait with their ponies, offering joy rides to children and adults. 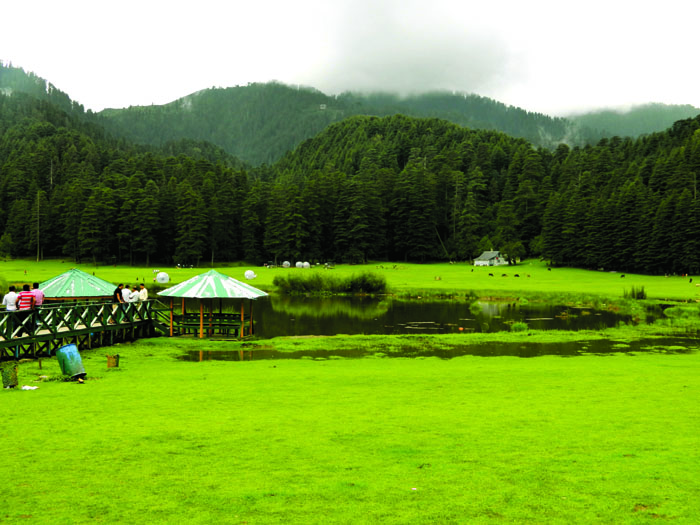 An hour’s drive from here will take you to Khajjiyar. Khajjiyar is famous for a beautiful grassland spread across one-and-a-half kilometres at 1890 metres of height.

Khajjiyar has a charming lake. On one side of the Khajjiyar lake is a marvellous temple offering a pretty sight for those boating on the lake water. This pleasant place also attracts thousands of tourists with its golf course.

Khajjiyar is surrounded by calm valleys of the river Ravi. Obviously these valleys are rich in scenic beauty and cultivation. From March to October we expect good weather in Dalhousie. Even if the light is gloomy, this picturesque hill station offers delicate moods and inspires one to continue capturing the images.

Malana is a solitary village at MalanaNala, a side valley towards the north-east of the Kullu valley. This ancient hamlet is separated from the rest of the world due to its a quaint location. 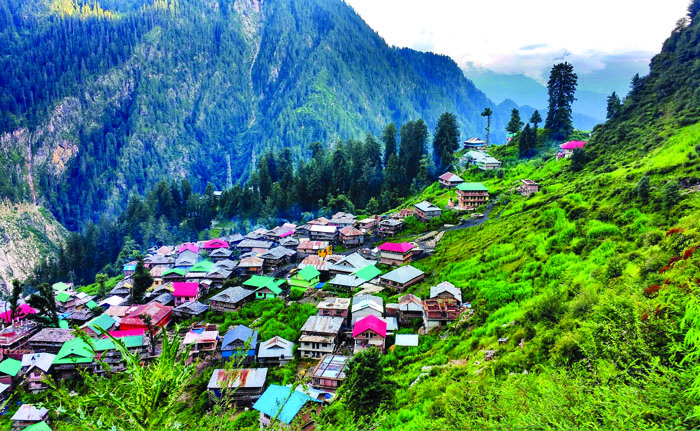 Malana is also famous for being the subject of various documen­taries such as Malana: Globalisation of a Himalayan Village and Malana, A Lost Identity.

Malana is quiet, calm and an idyllic hill town for a solo traveller. One can enjoy it in the warm glow of the bonfires during nights and feel the cool weather amidst the scented mountain breeze!

This quaint village abounds in religious legends and festive happenings too. The Phari population is fond of singing and dancing. Men use instruments like the mandir and dhol while women handle jhumlalathi for tapping the ground to keep pace with the music. The inhabitants speak Hindi, kumaoni and Phari in its different dialects.

Excursions from Malana village leads to Chandrakhani pass. From Malana village there is a moderate trek through the beautiful Chandrakhani pass at an altitude of 3,660 metres. One can encounter spellbinding views of the PirPanjal and Dhauladhar ranges and Parvati and Malana valley. The best part of the whole journey is the trail which passes through Alpine meadows and one has to stay overnights in camps.

In the land of Garo and Khasi Tribes…

Shillong is a perfect hill resort for a solo traveller. Shillong popularly known as the Scotland of the east is blessed with lakes, grassy landscapes, waterfalls, pine-scented hillsides and English cottages. Shillong is home to Khasi, Garo, Nagas, Mizos and the Manipuri tribes. 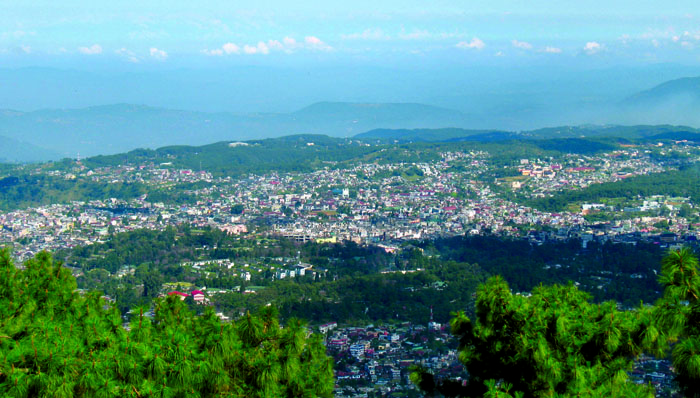 There are several waterfalls in and around Shillong. The most fascinating ones are the Eagle and Elephant Falls. These falls are truly wild and inviting! Some other prominent ones here are Margaret, Sweet, Bishop and Beadon. The drizzle, wilderness, suddenness and newness of these waterfalls are undoubtedly breathtaking.

Another enchanting location here is the Ward lake. The lake is surrounded by pineapple trees, betel plantations and a botanical garden. Some of the rare species of plants and trees can be encountered in the botanical garden.

The Shillong peak is a summit here that offers panoramic views of this alluring town and its nearby surroundings. This part of the mountain trail is a paradise for bird watchers as one gets a chance to see some rare species of wild birds such as the whistling thrush and tree pies.

As for the architecture of Shillong, it is simple and yet endearingly eloquent. The houses and cottages are built-in the simple English style with wooded roofs, cool verandahs and tall, pine in scented trees in the backyard.

The best season to visit Shillong is during the months of October and April. The sky remains clear and the air is crisp and healthy. Especially during late March, the rhododendrons and magnolias are in bloom and the hillsides are covered with red, yellow, pink and white blooms.

Excursions from Shillong lead to Umianlake and Cheerapunji. Cheerapunji that receives some of the highest rains in our country is a land of beautiful waterfalls, mysterious caves and deep ravines. One can also encounter different species of wild animals here at Cheerapunji. 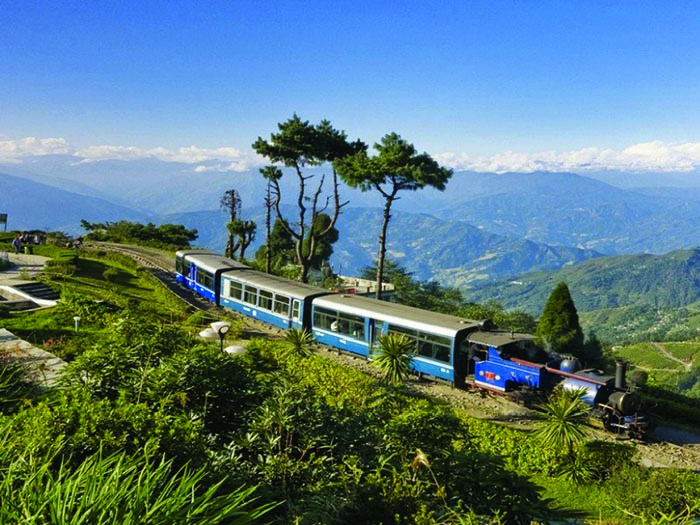 The Iconic Toy Train in Darjeeling.

Situated at an elevation of 2,134 metres Darjeeling, is a beautiful hill station of West Bengal. It is an idyllic world amidst cloud-topped peaks and flower-laden glades in the shadow of mighty Kanchenjunga.

Around 87 km north of Siliguri is this enchanting town predo­minantly with Nepali, Butani and Lapcha population. It is especially known for the prized tea leaf that is named after it and exported the world over.

Darjeeling promises to be as memorable as the destination! It is served by a delightful toy train ride that takes six hours to cover between Siliguri and Darjeeling.

Around 11 kilometres from this town is Tiger Hill at an altitude 2,555 metres. Tiger Hill’s location makes it perfect for a close view of snow-clad peaks of Everest, Kanchenjunga, Kabru, Jano, Pandem and Narsingh. Tiger Hill’s watchtower offers spectacular views of sunsets and sunrises.

Mountaineering, fishing and horse riding are favourite sports here. The Mountaineering Institute was established way back in 1954 in Darjeeling and is situated on Jawahar hill. There is a vast collection of books in its library and the two museums located inside its mansion are major attractions for tourists. 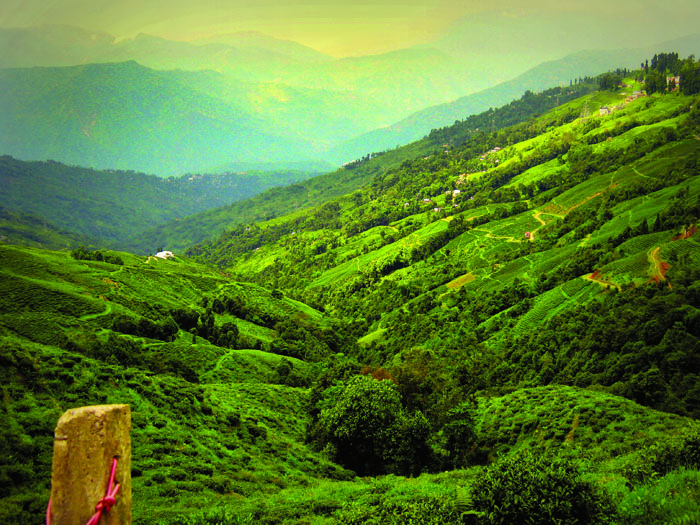 Adding to the historic atmosphere are the famous Dhirdham temple, BhanbhaktaSarani and archaeological remains. Nature lovers and wildlife enthusiasts can avail a good opportunity by visiting the Lloyd Botanical Garden and Padmaja Naidu Zoological Park. The unique attractions of the zoological park are the Siberian tiger and snow leopard.

During the Autumn season, one can encounter a profusion of wildflowers covering the treetops throughout this alluring town.