BB16: Dalljiet Kaur Lashes Out At Shalin Bhanot After He Calls Her His ‘Best Friend’

In the current season of Bigg Boss, television actor Shalin Bhanot is becoming a center of attraction for all females. While many inmates speculated a love angle between him and co-contestant Sumbul Touqeer Khan earlier, things are taking a new turn. As per the latest episode, Shalin is getting romantically involved with Uttaran fame actress Tina Datta inside the glass-walled house. Not just this, Shalin has also confessed his feelings to Tina openly now. 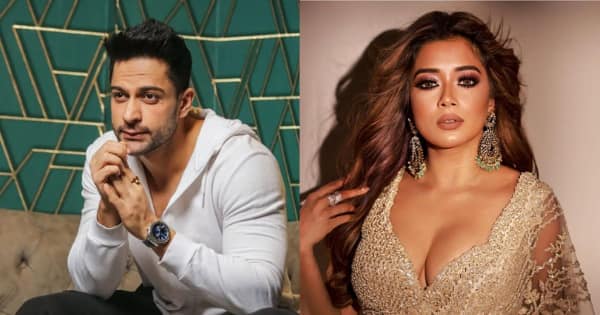 Besides expressing his love, Shalin opened up on an untouched chapter of his life with Datta. The conversation about Bhanot’s broken marriage with Dalljiet Kaur began when he came to Tina and thanked her for making his bed. When Tina prodded and asked him directly if he shared an abusive relationship with Kaur because she had heard things like that, Shalin replied, “No-no.” Let’s not talk about things.. because I really don’t want to. But it will be funny when I will tell you. You will be like ‘what, really? Really?’ and you will ask me ‘why don’t I speak about this? Because I don’t talk about it.” He revealed that Dalljiet is his ‘best friend.’
After the episode came out, Dalljiet took to her social media handle to tell one and all that Shalin is making up fake stories and that she is not friends with him. Contrary to what Shalin said about his failed marriage, Daljiet stated, “No I am not your best friend shalin. Meeting once in a month or two months for the sake of my child does not qualify as friendship. I wish you luck with your love life but leave me out of your fictions and stories please. And u r calling it funny? really? Tina no hard feelings for u.” 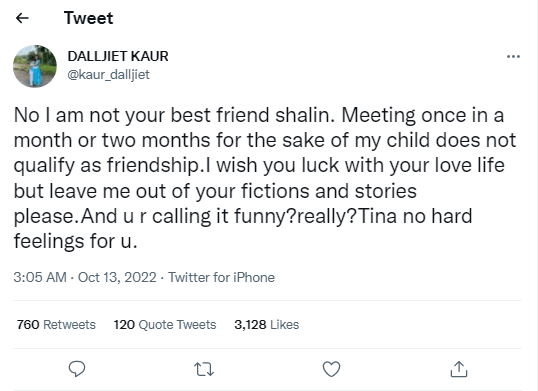 For the unknown, Shalin Bhanot was accused by his ex-wife Dalljiet Kaur of cheating, abusing, and strangling her for dowry. The ex-couple had met on the sets of the serial Kulvadhu. They had dated for a brief period before tying knot in 2009. Their relationship hit a rough patch soon after. The duo has a son named Jaydon (earlier Shaarav) together. In 2015, they parted ways on a bitter note.