According to National Crime Records Bureau (NCRB), 2020 released data Kolkata has gained the top spot in the list of the country’s safest cities for the year 2020, with the lowest rate of cognizable offenses. Bengal with a score of 129.5, comes on top of the list, which measures cognizable offenses recorded per lakh people, followed by Hyderabad (233) Mumbai (318.6), and Bengaluru (401.9). The national average is 810.3.

The records indicate that Kolkata has fared well in containing violent crime, registering only 53 cases of murder and 121 cases of murder attempts, compared with the 55 and 143 cases reported in 2018.

In contrast, Delhi registered 461 cases of murder and 562 murder attempts, while Mumbai registered 168 murders and 348 attempts. Kolkata also saw 11 rapes, again fewer than the 14 rapes of 2018 and 15 of 2017. There were 160 cases of assaults on women and 37 of sexual harassment. In contrast, Delhi reported 942 assault cases and 322 cases of sexual harassment. Chennai, with 33 cases of assault and 10 cases of sexual assault, was the only better performer among metro cities in this measure. 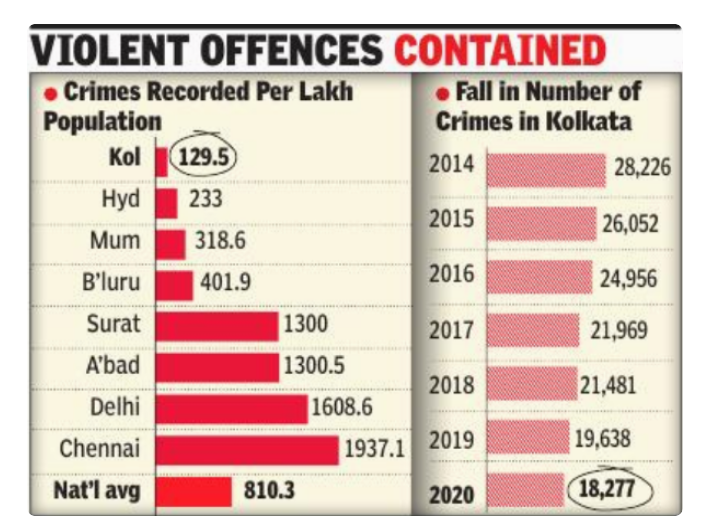 The only black spot remained the huge number of “hurt cases”. The city, yet again, topped the national figures with 4,513 cases. This, though, was still far fewer than the 6,439 cases reported in 2018. The other black mark on Kolkata’s report card was that it again remained in the list of the only three cities — apart from Delhi and Chennai — to record two acid attacks. The total number of counterfeiting cases (13) was only fewer than Delhi’s (32). On a positive note, the city has reported 17 FIRs in connection with wildlife and environmental protection.

A top officer credited the achievement to building “cutting-edge technology”, and upgrade and utilization of all available resources. “Focused attention of the state government towards creating infrastructure and additional manpower, upgrade of vigilance, both human and technological, night policing and extensive nakas (especially in the Covid months), preventing crimes against women, among other things, have helped greatly in the prevention and detection of crime,” said a senior detective department officer. “Whether it was a snatching on the Maidan or a case of ATM fraud, we have launched specific anti-crime drives and developed social awareness measures,” said an additional CP.

Dimple Girl Preity Zinta, Who Is Keen On Farming Away From Glamour, Shared A Beautiful Video; Watch It Out
Updates In IUCN Red List: Sharks, Komodo Dragons Head Towards Extinction, Tuna Recovers
Meet Swathy And Know Her Incredible EDRR Method Against Invasive Alien Insect
Once Again Kolkata Is The Safest Metropolis In The Country To Live In.