Bigg Boss 13 fame Shehnaaz Gill is a rage among a wide range of audiences. She won millions of hearts with her stint on the reality show and after coming out of it, there’s no looking back for this singer-turned-actress. Gill is currently hosting the who’s who of Bollywood on her chat show ‘Desi Vibes With Shehnaaz Gill’. And the recent guest on her programme was Vicky Kaushal. 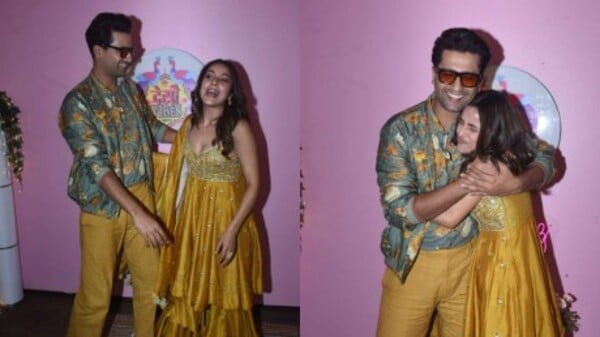 The duo posed for paparazzi while flashing their million-dollar smiles. When one of the photographers called Shehnaaz ‘Punjab Ki Katrina Kaif’, Vicky intervened and said that she is ‘India ki Shehnaaz Gill’. After shooting the episode with Vicky, Shehnaaz shared a bunch of candid photos with him and heaped praises on the actor for his humble nature.

In the caption, Shehnaaz wrote, “Very seldom you meet a star who makes you feel you are one of them. Very seldom do you get this feeling that you know this person for ages and is family. Very seldom, in your second meeting, do you feel that you know this person like he is family. I guess this is what a true star is. @vickykaushal09 I’m delighted to have met you once again and today’s chat was more than just conversations… I wish you nothing but success, good health, and positivity always.All the best for #GovindaNaamMera Waheguru Mehar Karev. Tuhadi movie superhit Hove.

Vicky re-shared the pictures on his Instagram story and penned a heartwarming note for Shehnaaz. He stated, “Such a pleasure meeting and chatting with you Shehnaaz. Such a pure soul you are! I wish only the best for you in life. Vicky x Shehnaaz,” followed by white heart emoticons. 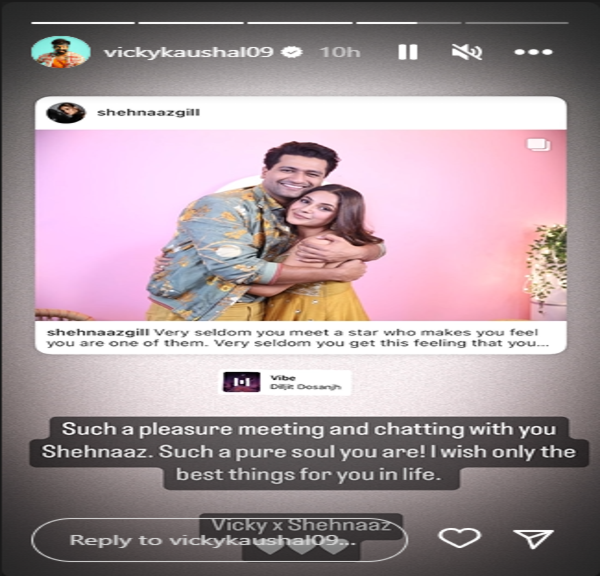 On the professional front, Vicky Kaushal is coming up next with Govinda Naam Mera alongside Bhumi Pednekar and Kiara Advani. He also has Meghna Gulzar’s Sam Bahadur along with Sanya Malhotra and Fatima Sana Shaikh and Laxman Utekar’s untitled next with Sara Ali Khan in the pipeline.

On the other hand, Shehnaaz Gill will make her Bollywood debut with the Salman Khan-starrer Kisi Ka Bhai Kisi Ki Jaan. She has signed Sajid Khan’s 100% alongside John Abraham, Riteish Deshmukh and Nora Fatehi.