Will she or won’t she? This has become the most frequently asked question among Taarak Mehta Ka Ooltah Chashmah audiences. Viewers have been eagerly waiting for the return of the show’s most beloved character, Dayaben, played by Disha Vakani, since she went on maternity leave.

There were no signs of her return until producer Asit Modi confirmed that Dayaben will return to the show with or without Disha Vakani. For the uninitiated, Disha Vakani took a maternity leave in 2018, and a few weeks ago, the actress welcomed motherhood once more, welcoming their second child – a boy.

The day has definitely come for Dayaben to return to Gokuldham. Jethalal aka Dilip Joshi, not us, has revealed her return to the show. Yes, you read that correctly! Disha Vakani’s fan page recently took to social media to share Jethalal’s announcement in the Gokuldham video from the show.

In the 20-second clip, Jethalal makes the big announcement, telling the inhabitants that Daya will return on the day of the inauguration. That’s when Komal Haathi declares that it is time to celebrate and that everyone should do garba. The entire Gokuldham society gets into the festive spirit.

However, netizens do not appear to be pleased or surprised by the latest update. “If this is a scam like last time, I am 100 percent sure that many will stop watching this show,” one person said (including me). Don’t mess with our emotions.” “Agar sach mai aana hai toh aau varna public ke emotions ke sath mat khelo,” said another.

According to one netizen, they have been making fun of their fan base for quite some time. “Ye log hamesha public ko aise hi ullu banate hue ahe hai daya ben ke sath or popatlal ki shadhi ke bare mei sirf episode banate jaiye,” the comment read. View the video below: 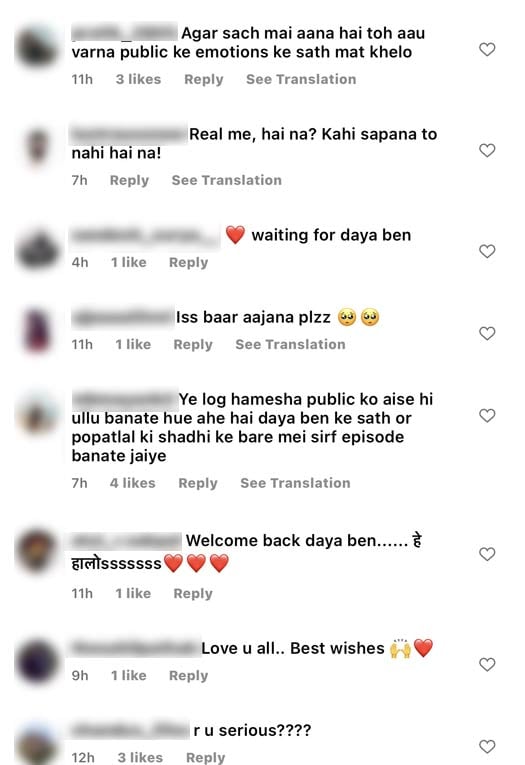 Producer Asit Modi previously revealed to ETimes, “We have no reason not to bring back Daya Ben’s character.” However, we have all experienced troubled circumstances in recent times. 2020-21 was a difficult time for all of us. But now that things have improved, in 2022 koi bhi acche samay par we will bring back the character of Daya Ben and audiences will once again be able to enjoy the entertainment of Jethalal and Daya Bhabhi.”