Indian heartthrob Hrithik Roshan and Pakistani beauty Mahira Khan enjoys a huge fanbase in their respective countries. Recently, the two came under one roof at the closing ceremony of the ongoing Red Sea International Film in Jeddah, Saudi Arabia. Their meet up is taking the internet by storm.

While Hrithik looked handsome in formal suit, Mahira looked breathtakingly gorgeous in a shimmery golden gown. The two sat next to each other and were even recorded having a conversation with each other. As soon as this footage went viral on social media, fans started going gaga over them. They started manifesting a film with Roshan and Khan in it. Some even expressed their wish to see the duo dating each other in real life.

A Reddit page has shared a picture from the same occasion where Hrithik and Mahira are having an eye contact. The comments section of this post is filled with fans shipping them to another level.

A user penned line of Hrithik’s romantic song, ‘Dil Kyu Ye Mera Shor Kare’ and wished for Hrithik and Mahira’s union. “Could’ve been a good couple. Both have kids and are divorced, so they’d understand those aspects of each other well,” said a user.

“Both currently have partners too. Mahira’s one is a big time bore but Saba Azad is just so cool. She’s a perfect fit for Hrithik, although it seems they connected over jazz and goofiness. Mahira has both instincts too, but Saba’s much more fun and can act better as well. Interestingly, Mahira’s name in her most famous movie was Saba,” opined a netizen. 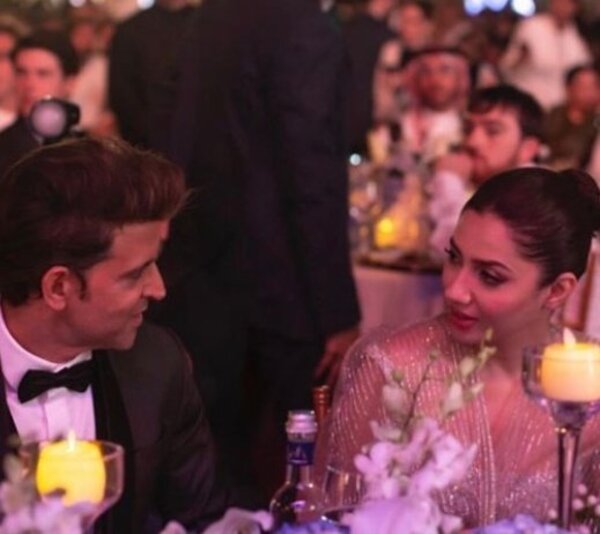 On the professional front, Hrithik Roshan was last seen in Vikram Vedha . He will be seen next in Fighter and Krrish 4. On the other hand, Mahira Khan is basking in the success of her last release The Legend Of Maula Jatt.