Actress Alia Bhatt took the internet by storm after announcing her pregnancy with a cute post on her social media handle. Soon after wishes started pouring in for the mommy-to-be Alia and daddy-to-be Ranbir Kapoor. The comments section of Alia’s Instagram post got flooded with good wishes from family members, colleagues, and fans. But of all the warm wishes that got extended for this beautiful couple, one that is grabbing attention is from a condom brand ‘Durex.’ 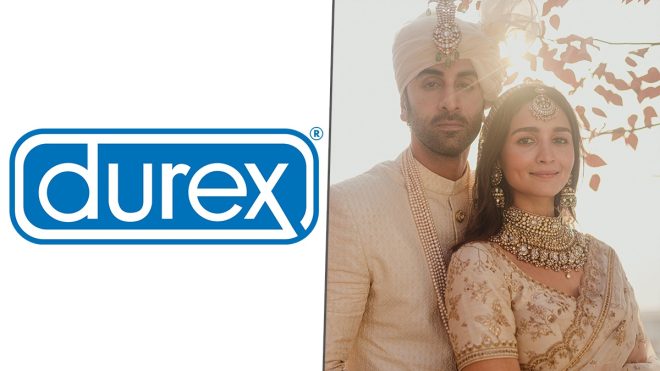 Referring to Ranbir’s popular song ‘Channa Mereya’ from his film Ae Dil Hai Mushkil,  the condom brand congratulated Ranbir and Alia most uniquely. The post, which many are appreciating, reads, “Mehfil mein Teri “hum to nahi the” congratulations.”

Sharing this quirky post, Durex India added in the caption, “The JOMO is REAL! Congratulations Alia & Ranbir.” Soon after the post was dropped it got increasingly viral on the internet. The comments section of Durex India is getting filled with laughing emojis. 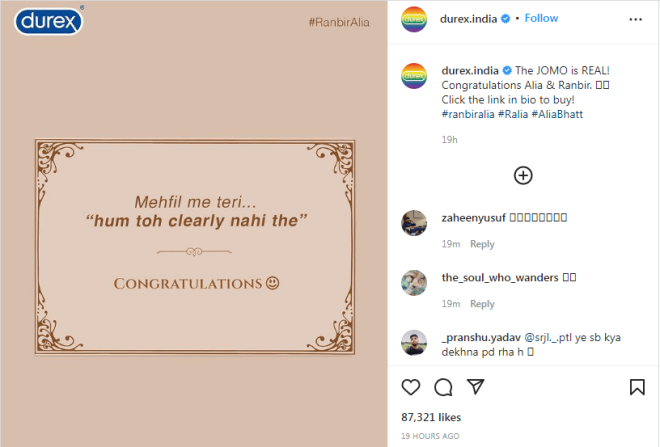 Earlier in April, when Ranbir and Alia tied the knot in a close-knitted family function, the same contraceptive brand attracted viewers’ attention with the way they congratulated the newlyweds. Showcasing their witty sense of humor, Durex India put out the following post: 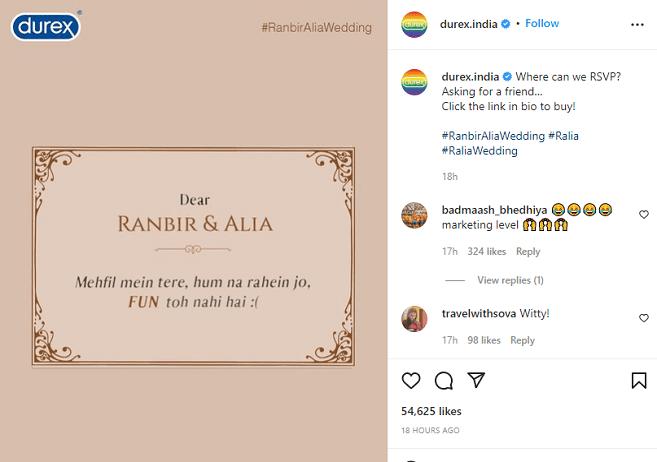 While sharing the news of expecting her first baby,  Alia uploaded a picture of herself lying on a hospital bed. Alongside Alia is her husband, Ranbir Kapoor, who is showing his back to the camera. Both of them are lovingly looking at the ultrasound on the monitor. In the caption, Bhatt wrote, “Our baby…..coming soon.” She also added an infinity sign, a red heart, and a star emoticon after the caption.