Today is Mahashivaratri, and Bollywood celebs, like many other Indians, are enjoying the significant occasion. They also turned to their social media accounts to wish their followers well. Many people have even uploaded photos of themselves celebrating the occasion at home. On Twitter and Instagram, Ajay Devgn, Priyanka Chopra, Sonam Kapoor, Malaika Arora, and others have expressed their best wishes. Priyanka Chopra shares a photo of herself worshipping Lord Shiva and doing puja at their Los Angeles home, staying true to her origins. Nick Jonas is also in attendance for the puja. 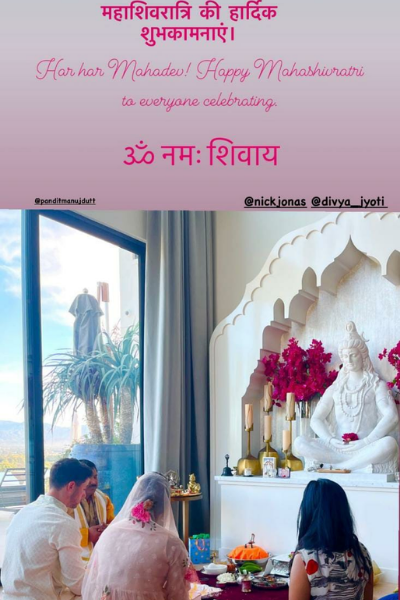 “Happy Mahashivratri to everyone,” Priyanka captioned the photo. She is dressed in ethnic clothing in the photo. Nick, too, is dressed in a white kurta, and the two of them are worshipping Lord Shiva. All of the puja preparations are also visible. The actress, on the other hand, celebrates all Indian festivities with zest and fervor.

Priyanka Chopra and Nick Jonas revealed earlier this year that they had had a child through surrogacy. “We are overjoyed to confirm that we have welcomed a baby via surrogate. We respectfully ask for privacy during this special time as we focus on our family. Thank you so much,” a note from Nick and Priyanka read. The Dil Dhadakne Do actress recently shared a photo of her daughter’s nursery on social media.

Priyanka recently released a batch of photos that included a look at her baby’s room. Several soft toys were arranged next to a Lord Krishna statue in the shot.

In terms of work, Priyanka will be seen in Citadel. She’ll also appear in Text For You, a remake of the German film SMS für Dich, which was released in 2016.

She is now working on Farhan Akhtar’s Jee Le Zaraa. The film is anticipated to be about a road journey with solely female characters. Farhan had also announced the starring actresses, Katrina Kaif and Alia Bhatt when he announced the project.