Shilpa Shetty Finally Breaks Her Silence On the Ongoing P*rn Case Against Her Husband; Read What She Said

The arrest of Shilpa Shetty’s businessman husband Raj Kundra shocked the entire nation. His alleged connection with producing adult movies has been giving not only him but his family also a tough time. From the time Raj got arrested, his actress wife Shilpa Shetty has kept mum on the issue. She is facing a lot of trolling on social media for the same. 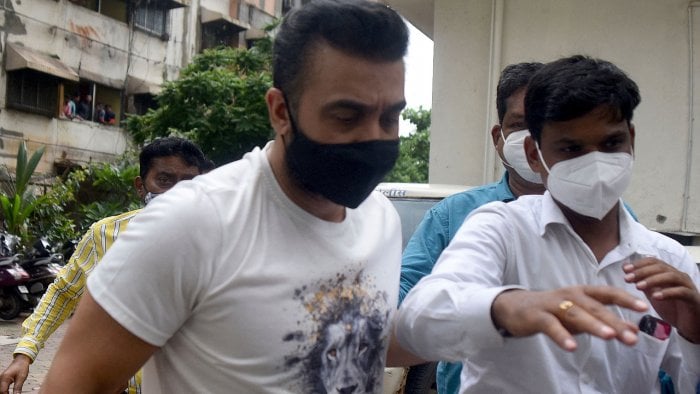 But now finally, the actress has broken her silence. On August 2, Shilpa released her first statement. The statement shared by her on Instagram presents her stand and also clears out all rumors and accusations.

Shilpa Shetty’s statement reads, “Yes! The past few days have been challenging, on every front. There have been a lot of rumors and accusations. A lot of unwarranted aspersions on me cast by the media and (not so) well-wishers as well. A lot of trolling/questions were posed not only to me but also to my family. MY STAND I HAVE NOT COMMENTED YET and will continue to refrain from doing so on this case as it is subjudice, so please stop attributing false quotes on my behalf (sic).”

Further in her statement, Shilpa said, “Reiterating my philosophy of, as a celebrity “Never complain, never explain”. All I will say is, as it’s an ongoing investigation, I have full faith in the Mumbai Police & the Indian judiciary. As a family, we are taking recourse to all our available legal remedies. But, till then I humbly request you – especially as a MOTHER – to respect our privacy for my children’s sake and request you to refrain from commenting on half-baked information without verifying the veracity of the same (sic).” 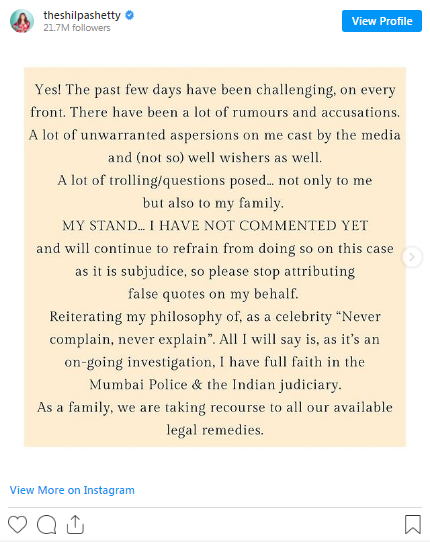 On the concluding note, Shilpa wrote, “I am a proud law-abiding Indian citizen and a hardworking professional for the last 29 years. People have put their faith in ME & I’ve never let anyone down. So, most importantly, I request you to respect my family’s and ‘my right’ to privacy in these times. We don’t deserve a media trial. Please let the law take its course. Satyamev Jayate! With Positivity and Gratitude, Shilpa Shetty Kundra (sic).”

Earlier Shilpa also moved to Bombay HC and accused the media and social media platforms of publishing defamatory content about her. Though her plea was dismissed by the court, she got the support of director Hansal Mehta on the same. The ace filmmaker defended Shilpa and asked people to respect her privacy. In a series of tweets, Hansal wrote, “If you cannot stand up for her at least leave Shilpa Shetty alone and let the law decide? Allow her some dignity and privacy. It is unfortunate that people in public life ultimately are left to fend for themselves and are proclaimed guilty even before justice is meted out (sic).”

Actress Richa Chaddha backed Hansal’s statements and landed support to Shilpa. In response to Mehta’s tweet, the actress wrote, “We’ve made a national sport out of blaming women for the mistakes of the men in their lives. Glad she’s suing (sic).”