Shreya Ghoshal Is Related To New Twitter CEO Parag Agrawal- Find Out How!

The Indian-American technology executive Parag Agrawal has made the nation proud by becoming the CEO of social media giant Twitter. He is trending in India since the time his appointment got confirmed for the prestigious position. Now, fans have dug up a connection between Parag and Bollywood singer Shreya Ghoshal. Scroll down to know more.

Shreya Ghoshal and Parag Agrawal are actually childhood friends. Shreya first found Parag on Twitter in 2010 when she gave him a birthday shoutout which gave him quite the limelight in terms of attention and followers. Since then, the two have often exchanged messages on Twitter.

Shreya had tweeted “Hey all!! Found another bachpan ka dost (childhood friend)! Foodie and traveller… A Stanford scholar! Follow @paraga… It was his b’day yesterday! Wish him please,” Parag, surprised by her followers’ love had replied, “@shreyaghoshal Aila. You are influential. Followers and Twitter messages flooding in.” 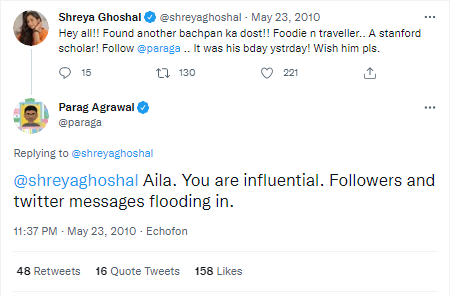 Not only this, the two often appreciate and compliment each other. They also share travel plans, exchange tweets, and much more. On social media, Parag and Shreya have also posted pictures posing with their respective better halves. Few of their admirers even re-posted the same pictures of them on social media. 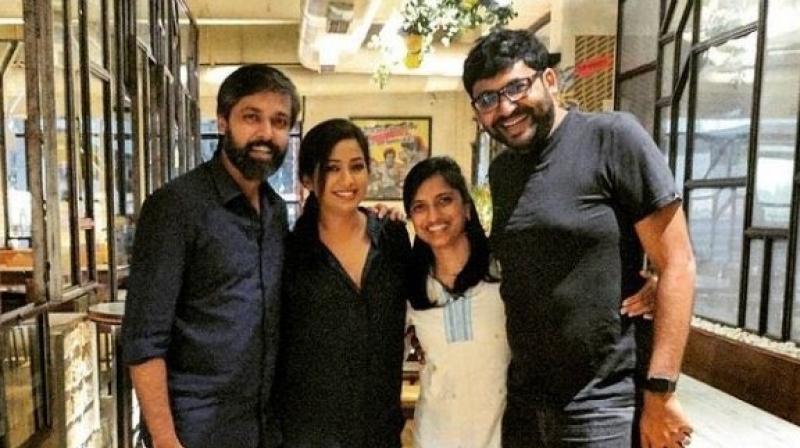 On recent Monday, after Parag announced his new position at Twitter, Shreya was seen retweeting his statement and praising him. She wrote, “Congrats @paraga. So proud of you! Big day for us, celebrating this news.”

Congrats @paraga So proud of you!! Big day for us, celebrating this news♥️♥️♥️ https://t.co/PxRBGQ29q4

Parag took to his Twitter handle to share this big news and wrote in his note, “I look forward to building on everything we have accomplished under Jack’s leadership and I am incredibly energized by the opportunities ahead. By continuing to improve our execution, we will deliver tremendous value for our customers and shareholders as we reshape the future of public conversation.”

For the unversed, Shreya Ghoshal is currently ruling everyone’s heart with her latest track Chaka Chak which she sang for the upcoming film Atrangi Re. The song has been composed by Oscar winner AR Rahman and is picturized on Sara Ali Khan. This year, the singer has also lent her voice for other hit songs like Zaalima Coca Cola (Bhuj: The Pride of India) and Ratti Ratti Reza Reza (Meenakshi Sundareshwar).