Soha Ali Khan discusses how her daughter Inaaya Naumi Kemmu deals with her career and shooting schedule, as well as how she teaches her the importance of hard work.

Soha Ali Khan has returned to acting this year, and the Amazon Prime Video thriller Hush Hush is her second production since then. After giving birth to her daughter Inaaya Naumi Kemmu in 2018, the star decided to take some time off. Soha told Hindustan Times that her five-year-old daughter Inaaya recognises the importance of her mother’s profession but doesn’t get why “mumma needs to work,” offering up creative ways for her mother to evade her responsibilities. In related news, Soha Ali Khan shows off Inaaya’s new pastime in a series of adorable Instagram posts, which you can read about here:

In January, Soha returned to TV with the Zee5 show Kaun Banegi Shikharwati. Soha had previously told HT that it took some time for Inaaya to adjust to the concept of her mother working. Inaaya is used to seeing her father, actor Kunal Kemmu (Soha’s husband), at work, but this was the first time she saw her mother at the office. Soha claims Inaaya has adjusted, but she still won’t let her go to work. “She understands, but she maintains a resolute “I don’t see why you have to” stance. She thinks it’s fine for one person to travel, and that the other one should stay home,” Soha explains.

The star continues by saying that her kid recently left her perplexed with her rationale while she was leaving her with a caregiver. “I leave her with a highly skilled babysitter,” Soha says. In my most recent nighttime departure, I reassured her that her nanny, Rashmi didi, would put her to sleep.

Concerned that she would be unable to get what she needed, she asked, “Will she manage?” She is quite intelligent, I told her. Literally anything is within her reach. So why don’t you send her for shooting, Inaaya suggested? In other words, “she is not that clever,” as I put it. I was completely at a loss for words. 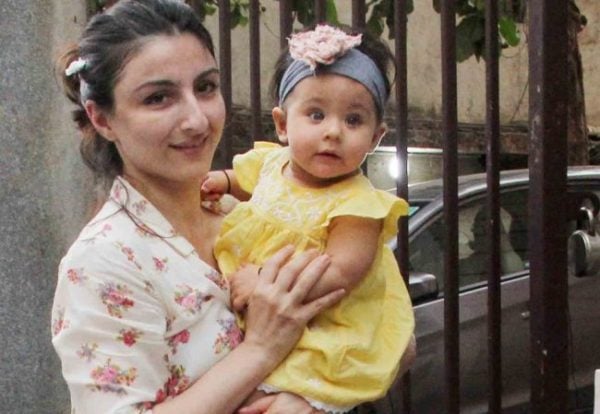 Soha Ali Khan, however, claims that she often emphasises the significance of employment by telling Inaaya that she has a choice in the matter. In the beginning, I always apologised for leaving her and promised to return soon. I make an effort to introduce myself as someone who “goes because they love it” these days. My job is something I take pleasure in. And you know that the only reason I’m spending this time away from you is that I enjoy it. She is old enough at this point to entertain herself when I’m not around. She admits that there are still times when her daughter misses her, but that she is “growing accustomed to it.”