The most controversial show on Indian Television Bigg Boss is back with the 16th season. And as soon as it premiered its opening episode, there started several trends on Twitter. The most eye-catching among them all was related to filmmaker Sajid Khan’s participation in the show. Netizens are irked with makers for giving the alleged sexual molester such a big platform. Apart from this, social media users are also trolling Shehnaaz Gill and Kashmera Shah for showing support to Sajid. Now, joining them is the internet sensation and ex-Bigg Boss OTT contestant Urfi Javed. 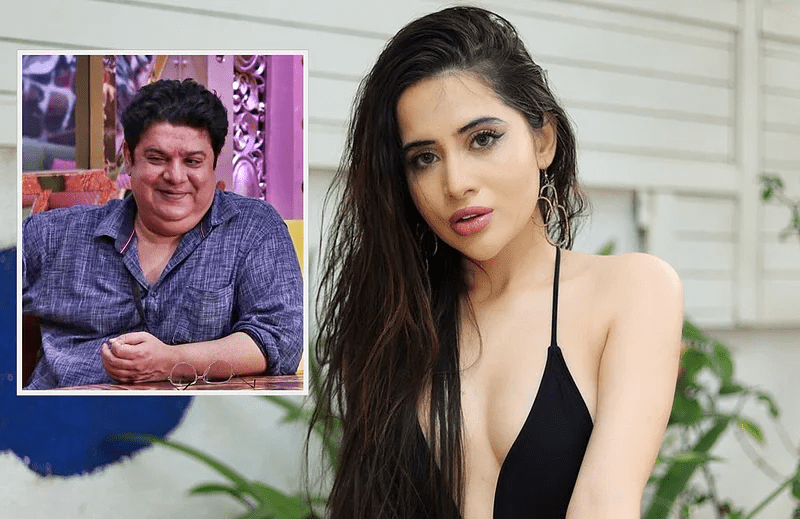 Taking to her Instagram, Javed slammed the Bigg Boss 16 makers for giving an entry to a ‘sexual predator’. Sharing a screenshot of multiple accusations on Sajid, Urfi wrote, “Bigg Boss, why would you do that? When you support sexual pedators, you’re actually telling them that it’s okay what they have done. These men need to know this behaviour is not okay and they cannot get away with it. Stop working with sexual predators! It’s not controversial, it’s just disgraceful! Sajid Khan never apologised for what he did! Imagine what the girls he harassed must be feeling? So you don’t really have to worry because even if you harass multiple women you will still get to be on the biggest show in India!! Controversy ke liye aap har cheez thode support karenge! #Colors stop supporting sexual predators!!! #biggboss #colors #disgraceful.” 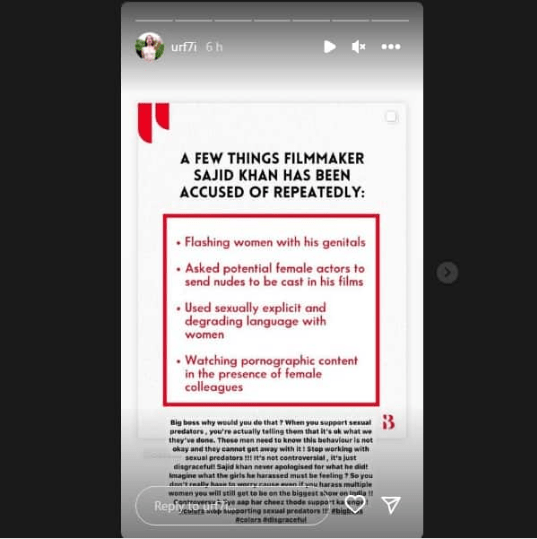 Furthermore, she extended her sympathy for the ones who got victimized by Sajid Khan. “Not that I got an offer from Bigg Boss this year but even if I got it, I wouldn’t!! Can we all please stop supporting sexual predators. I can’t even believe what the girls he harassed must be going through seeing him everyday on television,” she added.

Putting another screengrab of news piece reporting of Shehnaaz Gill and Kashmera Shah’s support to Sajid Khan, Urfi penned, “If women like Shehnaaz gill, Kashmera shah are free to support a sexual predator , I’m free to criticise him and both of them too !!” 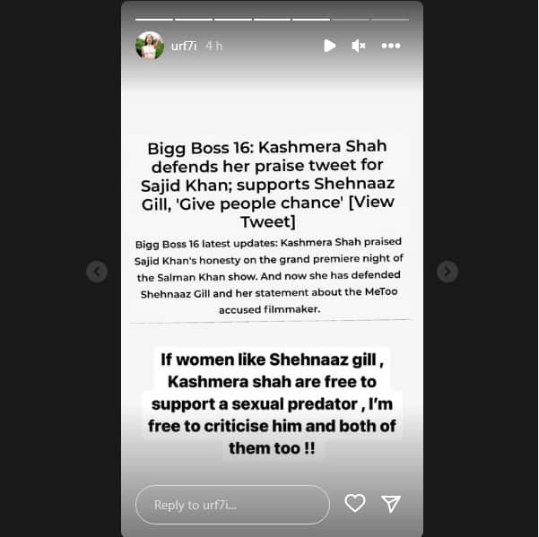 For the unknown, The Indian Film and Television Directors’ Association (IFTDA) had barred Sajid Khan from directing films after molestation allegations against him came to the forefront in 2018. He is out of work for the last four years.