Debina Bonnerjee Shares First Glimpse Of Her Second Daughter, “Your Firsts Will Be Lasts For Me”

TV actress Debina Bonnerjee is currently enjoying the phase of motherhood. She has recently blessed the feeds of viewers with the first picture of her second child, whom she welcomed a few weeks ago.

Taking to Instagram, Bonnerjee shared the first glimpse of her second daughter. Along with the adorable click, she penned a moving poem for her newborn. In the photo, the Chidiya Ghar actress is seen in red-coloured ethnic wear. She is holding the baby lovingly in her arms with her eyes closed. Her kid is wrapped in a white blanket and her face is covered with a pink heart emoji. 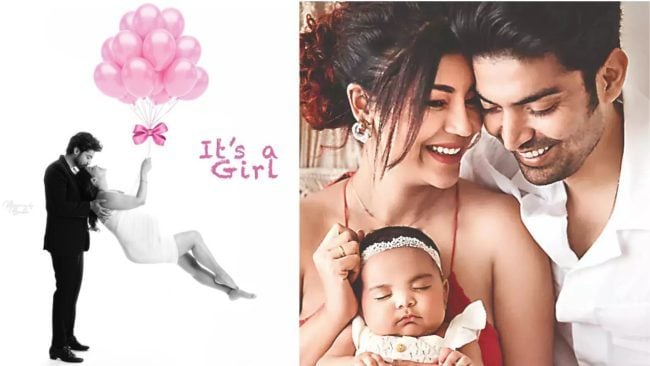 Quoting writer Emma Robinson’s poem in the caption, Debina wrote, “To my second child, you’re not my first, that much is true. I loved another before loving you. I’m a different mother this time around. More calm and confident I’ve found. Since you came, there’s been a new dimension. Two children now want my attention. I was so excited the first time around. This time I want to slow things down. Your ‘firsts’ will all be ‘lasts’ for me. It last crawls and lasts to ride my knee. You were not my firstborn this is true, but the last child I will have is you. You’re the last lullaby I’ll ever sing. And ‘lasts’ are a special kind of thing.” 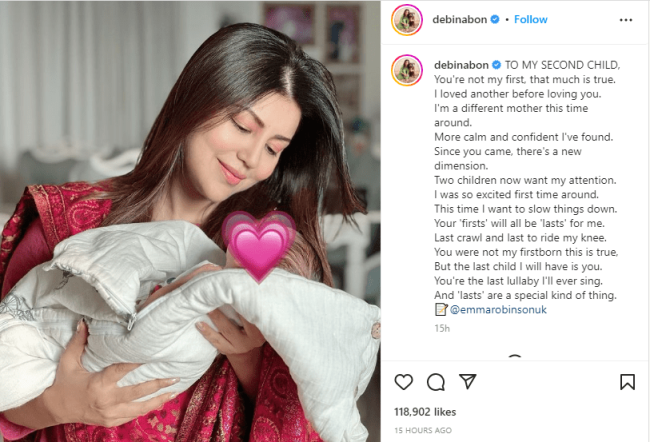 Announcing the arrival of their second munchkin, the Ramayan duo Debina and Gurmeet wrote in a joint post on their IG handle, “Welcome our baby girl into the world. As ecstatic as we are becoming parents again, we appreciate some privacy at this time as our baby has come into the world sooner than due. Keep blessing and showering your continued love.”

For the unversed, Debina and Gurmeet tied the knot in 2011. They became proud parents to their firstborn Lianna on April 3 this year. Their second child came into the world on November 11, 2022, barely eight months after Lianna.