Tejasswi Prakash-Karan Kundrra’s Parents Planning To Get Them Engaged? Check Out Story!

Karan Kundrra and Tejasswi Prakash recently made news after the actress from Naagin 6 were seen visiting Karan’s home. Karan sported a ’tilak’ on his brow. Tejasswi had been over to introduce himself to his parents. It had fueled talk of an engagement. Since they were trapped inside Bigg Boss 15’s house, Karan Kundrra and Tejasswi Prakash’s wedding has been the buzz of the town. T

eja’s visit to Karan’s residence reignited the rumours once again. It was, however, Karan’s parents’ anniversary, which is why Tejasswi had stopped over to wish them. TejRan fans were frenzy as pictures and videos from Teja’s visit went viral. 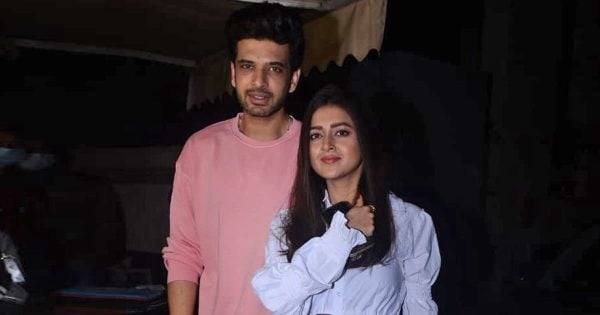 According to a story on Koimoi.com, the claims that Karan and his family went out to supper were false. Karan was preoccupied with the filming of Lock Upp. He completed his task and then drove his parents to the temple, where they were treated to supper. Tejasswi had happened to be passing by. The connection between Karan and Tejasswi has been made public. Almost every other day, the two are photographed together. Fans and their family like their chemistry together. Karan’s father recently referred to Tejasswi as his daughter.

The parents of Tejasswi and Karan are highly supportive of their relationship. They are not, however, rushing into things. They are both young and in the early stages of their relationship. Karan and Tejasswi are both preoccupied with their jobs. While Tejasswi is busy with Naagin 6, Karan was recently seen as a jailor in Lock Upp. Karan is also claimed to be in negotiations for new projects, according to BollywoodLife.com, who exclusively revealed that he is in talks with his mentor, Ekta Kapoor, for a new program. It’ll most likely be a web series.

Tejasswi recently said that she had become good friends with Karan’s mum. According to the Bigg Boss 15 winner, they are similar and get along well. Tejasswi further said that Karan is often left alone while they are together.

Many of them immediately got into the comments area and began pouring in heartfelt sentiments of congratulations. Take a look at the viral tweet embedded below:

1.Teju to pick sunny at lockupp set
2. Shopping for parents
3. KK with parents reach at Teju's place.
4. Tilak on #TejRan head
5. Blessings from both ends

There has been no formal confirmation from the pair or their respective teams yet.

Karan Kundrra appears as a jailor on Kangana Ranaut’s program Lock Upp, which she hosts in terms of the job. Tejasswi Prakash, on the other hand, is now occupied with the filming of Ekta Kapoor’s spooky television series Naagin 6.